Skip to content
HomeReflections on Cody’s Book The Educator vs. The Oligarch: The Poor Get Poorer 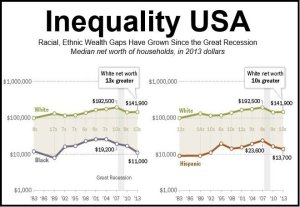 In the book The Educator And The Oligarch Anthony Cody critically examines the Bill and Melinda Gates Foundation’s efforts to reform education and describes a series of blog posts written by Cody and high ranking officials in the Bill and Melinda Gates Foundation which focused on five mutually agreed upon issues.   To me, the key issue was the role of education in the elimination of poverty.

According to Chris Williams, author of the Gates Foundation’s response,

When Bill and Melinda Gates started their foundation more than a decade ago, they made addressing the impact of poverty its central philanthropic mission. They looked at what kept people in poverty around the world, and focused on the challenges that were the biggest obstacles to families moving out of poverty, but were not high enough on the global agenda.  Today the foundation’s top priorities are a reflection of that approach—vaccines that save children from serious illness and death, more resilient and productive seeds that allow families to feed themselves and earn a living, access to contraception to ensure that women can decide when to have children, and a great teacher who can make a dramatic difference in the life of low income students in the United States.

Well said.  But Williams immediately backtracks, saying that that the Gates Foundation doesn’t have enough money to solve the problems of poverty here in the U.S.  They had to “make decisions about how to focus our resources…”  Their decision?  “In the U.S., we focus on giving teachers the tools they need to be most effective.”

In his book Anthony Cody rightly states that the underlying issues keeping people in poverty need to be addressed – that focusing on teacher quality alone (through the analysis of student test scores) will not be enough to move many students out of poverty.  The Foundation’s Williams dismisses the big picture and states “a good education is one of the best avenues out of poverty.”  Why doesn’t the Foundation even want to try to make a difference outside of the classroom?

The Sargent Shriver Center for Poverty Law website cites six Policy Agenda items they are working on.  They include issues such advancing fair statutes for educational and employment opportunities, integrating job training with economic development, expanding access to food and nutrition programs, quality child care, ensuring fair workplaces, and improving access to quality education and skill building opportunities.  Many of these are policy issues, not resource issues.  The Gates Foundation seems more than willing to support policy issues related to the proliferation of charter schools, the expansion of student testing, and the use of student test scores to evaluate teachers – but not poverty.

In his post Williams said, “What we can’t do, however, is address all of the problems that put or keep families in poverty.”  Look back up at Williams’ overview of the Foundation’s mission.  He said, “addressing the impact of poverty [is] its central philanthropic mission” and then talked about what they are doing globally to support that mission.  It doesn’t seem that they are willing to provide the same type of supports here in the U.S.  Couldn’t they throw a few million earmarked for the Common Core implementation or teacher evaluation toward supporting policies in America that save impoverished American kids from “serious illness and death”, guarantee better nutrition for impoverished American kids, and access to contraception for impoverished American women?

Why the laser focus on “improving” American teachers?  It’s not to eliminate poverty here since the Gates Foundation won’t support the same antipoverty policies in the U.S. that they do elsewhere.  In his 2012 Annual Letter Bill Gates said, “Our work in U.S. education focuses on two related goals: making sure that all students graduate from high school ready to succeed in college and that young adults who want to get a postsecondary degree have a way to do so.”  By not working to address the broader range of issues that keep kids in poverty, Gates is implicitly promoting a further widening of the wealth gap.  If successful in improving teacher quality the Foundation will get more middle- and upper-class American kids into college – and better jobs.  The heck with those poor kids.

3 thoughts on “Reflections on Cody’s Book The Educator vs. The Oligarch: The Poor Get Poorer”